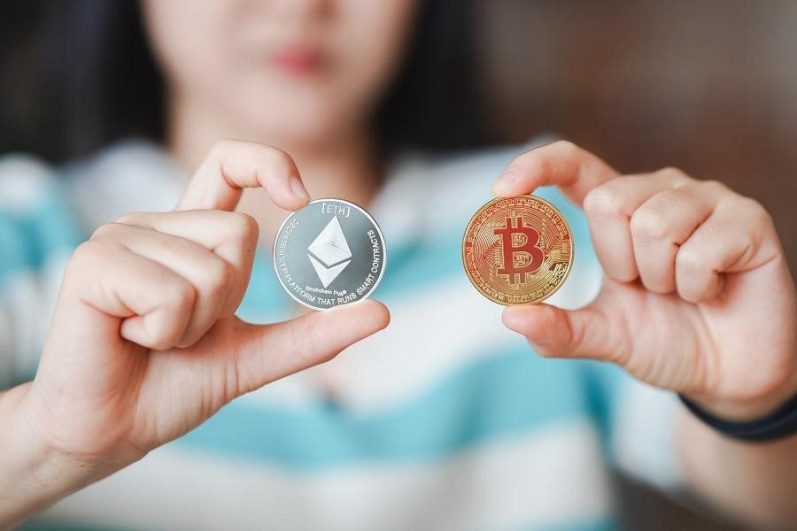 Bitcoin has dominated the crypto scene from the very beginning, despite the constant expansion of the ecosystem and the numerous crypto projects that continue to emerge year after year. The only other digital currency that has ever posed a real threat to Bitcoin’s supremacy is Ethereum. As the biggest altcoin on the market in terms of value and popularity, Ethereum has always occupied a cozy second position in the crypto race, keeping close to the leader but never coming close enough to change the ranking order.

Over the years, the Bitcoin vs Ethereum comparison has turned into an epic battle, with stakeholders and analysts making all sorts of predictions about how things might evolve. Both coins have experienced price fluctuation and went through several phases of rise and decline, but not much has changed in their relationship. Bitcoin has kept its leadership position while Ethereum remained the second runner-up.

However, the competition might finally intensify now that Ethereum has completed the biggest update in its history. So, if you’re curious about how things might unfold from here on, let’s take a look at the most recent events and how they might impact the Bitcoin – Ethereum rapport.

Ethereum after the Merge

Ethereum has recently finalized its most ambitious upgrade to date – a process famously known as the Merge. On the 15th of September, the platform made the transition from a proof-of-work to a proof-of-stake consensus in order to address a series of issues and bring some long-awaited improvements.

Prior to the Merge, the network operated on the original execution layer, the Mainnet, which was based on a proof-of-work mechanism, with a proof-of-stake blockchain called the Beacon Chain functioning in parallel. After the upgrade, these two separate blockchains merged into one single unified chain, and now the platform relies entirely on a proof-of-stake consensus.

There are many ramifications stemming from this upgrade, but the main purpose of the Merge was to tackle the energy consumption issue. The former proof-of-work mechanism required large amounts of computational power in order to verify and validate transactions and thus consumed a lot of energy in the process, which was not exactly an environmentally friendly approach. With the introduction of the proof-of-stake mechanism, Ethereum was able to reduce energy usage by roughly 99%, becoming one of the greenest cryptocurrencies out there.

Then there’s also the scalability aspect to take into consideration. The Merge is the first step in a series of upgrades that are meant to facilitate expansion, bringing the network one step closer to achieving its scalability vision.

Will the Merge trigger the flippening?

As you can see, a lot of things have happened in the Ethereum ecosystem over the past few months, so people have naturally started wondering how these transformations might influence ETH price and, most importantly, how this will reflect on the longstanding Bitcoin vs Ethereum competition.

A lot of crypto enthusiasts are saying that the completion of the Merge could finally bring about the flipping – a concept that refers to the potential scenario where Ethereum increases in value and finally surpasses the reigning champion, Bitcoin.

It’s obvious that the Merge will mainly impact Ethereum and the way it operates, so we need to start the analysis by looking at the immediate effects that the update will have on the network. Given that Ethereum just got a lot greener, something that not many cryptos can boast about, it’s likely that more users will be attracted by the prospect of investing in Ether or using the network to build decentralized applications. This may lead to a potential price increase in the future, although it’s not possible to make accurate predictions in this respect.

Ethereum has also planned a series of updates that will follow after the Merge – the Surge, the Verge, the Purge, and a Splurge. Each one of these upgrades will further improve the network and increase its appeal for both investors and organizations.

While it can be argued that Ethereum may gain a competitive advantage now that the Merge has been completed successfully, it’s difficult to assess the extent of the consequences that the update is going to have on other cryptocurrencies and the market as a whole. For now, there haven’t been any signs that would announce a major change in crypto rankings. But it’s only been a few weeks since the merge happened, so it might be a bit too early to see any real changes.

Bitcoin or Ether – which one to choose?

Bitcoin has seen many crypto projects come and go and has managed to withstand many changes, both in its own progress and the development of the market. After every challenge and obstacle, Bitcoin came out stronger and more resilient. It’s highly unlikely that an update that was many years in the making and the entire crypto community knew about is going to knock Bitcoin off its throne. However, Bitcoin is still using the proof-of-work consensus and using vast amounts of power in the process. This doesn’t really align with the environmentally conscious demands of the market. There are also many who claim that Bitcoin’s technology is already outdated and will become obsolete sooner or later if nothing changes.

On the other hand, Ethereum is taking big leaps to address its deficiencies and keep up with the evolution of the market. The network’s founders are constantly looking for ways to innovate and bring new features that can support further progress in an environment that continues to evolve at a rapid pace.

Both Bitcoin and Ethereum have a long track record of success. Based on their past performance, we can conclude that they will continue to dominate the crypto environment in the years to come. So, if you’re wondering which one of these digital currencies represents a better investment, there is no clear answer that can help you solve this dilemma. Bitcoin and Ethereum are different in many aspects, making any comparison rather irrelevant. If you want to invest in any of them, you’ll need to research both projects and see which one fits your needs and requirements better.

How to Be a Successful Introvert at Work