Home > education > What Is The Exam Pattern For The GRE? 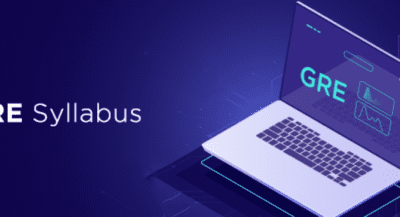 The Graduate Record Examinations, more commonly known as, GRE is an important standardized test that is used for the purpose of admission to graduate schools in countries like United States and Canada. As it is a mandatory test, there is no way around it. If you are intending on doing your master’s degree from the US, you would have to go through GRE and clear it with required marks criteria. As much as the importance of the exam is, its difficulty is no less. To clear the exam, a candidate must have clear idea about the marks goal they need, gre exam pattern, study plan, etc. Only with a properly structured study plan and well-prepared syllabus can you clear this exam. So, in order to help you get started, let’s get you some more information about the exam pattern.

GRE question papers can be divided intro three important sections: Analytical writing, quantitative reasoning and verbal reasoning. With three hours and thirty minutes as the total exam duration given for paper-based GRE exams and three hours and forty minutes for the computer-based GRE, it is a must that the students learn the art of time management before going into the hall. As the top marks do not belong to those who know the most but to those who know how to attempt most questions accurately within the given time.

Other than the three main sections of Analytical writing, quantitative reasoning and verbal reasoning, the paper would be divided into two sub-sections of each of these three main sections. To get started the Analytical writing would comprise of two questions which the examinee would have to solve within seventy minutes only. For verbal reasoning you would be given fifty questions to attempt withing seventy minutes whereas for quantitative reasoning you would get eighty minutes to solve another fifty question. There are two other variable sections, namely unscored and research, which are not included in this type of the GRE exams.

Similar to the paper-based type of GRE, the analytical section of computer-based GRE also has two tasks which are to be completed within sixty minutes or an hour. Though unlike the paper-based exams, you would get sixty minutes for verbal reasoning with forty questions to solve in two sections and for quantitative reasoning you would have seventy minutes only to solve the given forty questions with two sections divided. The other variable sections which are not included in paper-based exam will be included in computer-based exams that is the unscored and research sections.